This past Tuesday saw the 27th annual Ann Arbor Jaycees Fourth of July parade! As I do every year, I festooned myself so that I could march with a friend running for office (the amazing Jason this year!)

Yup! That is the top to my Wonder Woman Underroos that I am wearing over my UNION THUG shirt. I do not at all take for granted the fact that a 45 year old woman was not only allowed to but encouraged to wear this and parade around. Ann Arbor is truly a magical place.

Parades have a long and lovely tradition in our town. Back in the day, you had to take your entertainment where you could get it. I guess that is still true, except that right now my entertainment is coming from Pluto TV and a laptop hooked up to wi-fi. The first people in the mid-1890s couldn’t do that, and so they had to actually leave the house if they wanted entertainment. 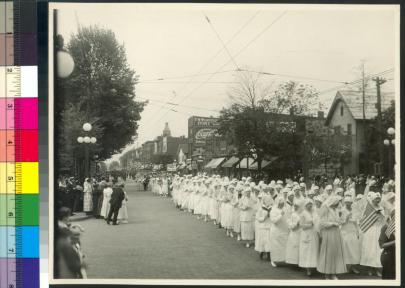 I think these were WWI-era nurses but  it kinda reminds me of the Handmaid show I watched this spring. Anyway back then we had an opera house, and there were speakers coming into town, and church activities, but the big thing were parades. (One of the first pictures in my downtown history book is of a parade coming down Main Street). We don’t have as many parades in the ol’ deuce these days, but we have some good ones, including the aforementioned Fourth of July parade. We also have Festifools every April! This is me and my friends Robert and Rena from a few years ago!

This is from 1948  and was called the Re-dedication Parade.

I can’t recall what exactly they were rededicating…maybe something to do with World War Two? At any rate, we loved us some parades back in the day. Circus coming to town? Parade. Someone famous coming to speak? PARADE! Presidential candidate showing up? You know what time it was–parade time!

And it’s still fun to march in them even though I am not fond of the throwing candy to kids thing. Candy is horrible for you but some of us eat it whenever it is there and then get too wound up and things are too much and we have to take our “calm down!! chews” (as Ken calls them…they are little tabs I put under my tongue when I get a little manic). But beyond that, candy is really gross and it turns into sort of a reverse Halloween. Also, you just know someone’s eye will get put out by a flying piece of Bubblelicious.