A version of this article previously appeared in MittenBrew. (You aren’t reading Mittenbrew?!?!? Why the hell not??!)

The phrase “an idea whose time has come” gets used quite often, and just as often, it doesn’t really fit the situation. For example, a friend of mine described KFC’s “double down” sandwich in such a manner; another friend said the same thing about Taco Bell’s breakfast burritos. (Okay, it was the same friend). But once in awhile, the phrase fits perfectly—as with the women’s craft beverage trade group Fermenta.

Fermenta’s first official event was held this weekend at WhichCraft Taproom in Midland. As an added bonus to WhichCraft’s outstanding beer selection, some of the Fermenta beers were available. WhichCraft used to be a horse barn, but it has been beautifully transformed into a taproom. The wooden floors and bright open space lend themselves to an afternoon of tasting beers with new friends.

In addition to providing ample opportunities to mix and mingle, the event featured an educational talk by Certified Cicerone, Annette May. Annette taught attendees about flavors and tastes of beers, focusing on the Saison that we sampled. Before and after the talk, members could browse the trade tables there were set up. The tables included samples of honey, information from hop farmers, and the latest brewing equipment. 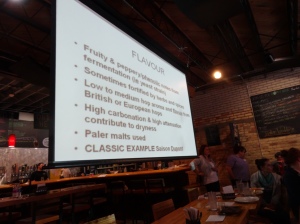 Annette is very smart and nice and pretty!

The group is already proving helpful to women who are newer to the industry, as well as veterans. Moragh Goyette, an assistant brewer with Grizzly Peak, said that groups like Fermenta have helped her transition from a job with the University of Michigan to professional brewing. “People take you much more seriously when they know that you are part of a trade group (like Fermenta),” she said. “The educational opportunities will also be a big help as I continue in my job.” Angie Williams of Griffin Claw added that the opportunities for women in the industry are “tremendous”, as Fermenta will increase its educational and networking events as it grows.

Pauling Knighton of Short’s Brewing Company is the first president of Fermenta. Echoing the enthusiasm of other attendees, Pauline said, “The part of the day that made me stop and smile the most was when a woman approached me to tell me that she had just accompanied her friend to the event, but had no intentions of joining. However, the woman was so impressed that she became a member and can’t wait to get more involved.”

To my dismay, I have heard many people (including many women) lament that women just can’t get along and that too many women together leads to problems. The exact opposite is true with Fermenta. The vibe of the day can best be summed up by Pauline Knighton, who said that at one point in the day, “I actually stopped, looked around, and was beaming with excitement. All the women who made today happen are amazing and worked their butts off–it was a just a great success. “

Cheers to many, many more successes! 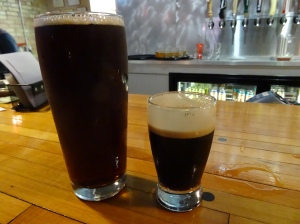 I made a friend named Moragh! That was her big glass and my little glass!