A version of this article will be printed on MittenBrew.com. Please check out their most excellent site!

Some time ago, Michigan and Washington were playing against each other in some sports contest or another. Our local paper put out a list pitting Ann Arbor against Seattle to see which was cooler. I love Ann Arbor, I would take a bullet in the face to defend it, and I think it is the greatest city in Michigan…but it’s really no contest: Seattle is bigger, it has a huge technology core, it is on the Pacific Ocean, and it has mountains. It also has a thriving craft beer scene. As far as I know, the two cities have never gone head-to-head in beer but as luck would have it, I was out in Seattle last week and decided to do a little brewpub tour to see what they had to offer. There was so much else to do that Ken and I only got to five pubs, but I was still able to sample a little bit of the Jet City and compare some of its offerings to the Mitten. 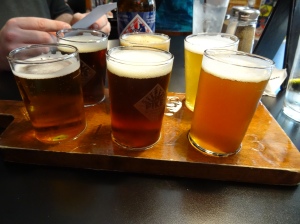 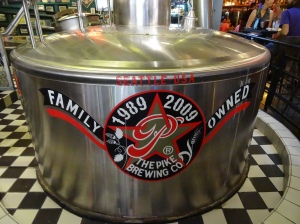 Pike Brewing Company – This was the brewpub that many people recommended to us. It reminded me of a bigger, more crowded Grizzly Peak or Arbor Brewing Company in that it definitely was set up like a restaurant and focused on good food. There were two samplers available: the “standard” beers and a special one made up almost exclusively of IPAs. Since neither Ken nor I are huge hop heads, we opted for the standard sampler. The standout for me was the Pike XXXXX Extra Stout. The beer was a lovely dark brown with a creamy head. It balanced notes of chocolate and espresso, with roasty malted goodness. I did not get any hop profile but Ken said it was too hoppy for him; its IBU was 65 and it was brewed with three kinds of hops, but perhaps I picked out the chocolate and coffee flavors enough that I didn’t mind the hoppiness? Either way, it was a nice and toasty 7% ABV stout that went well with the burger that I got. The stout reminded me of Arbor Brewing’s Espresso Love, but with a bit less coffee flavor. 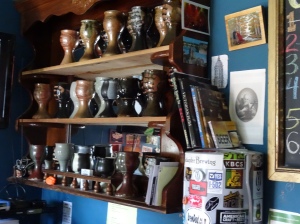 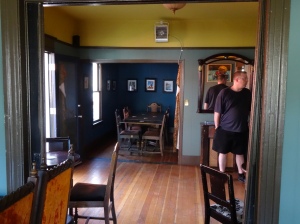 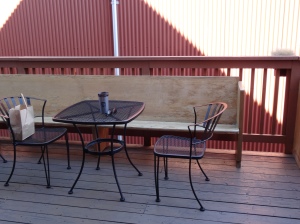 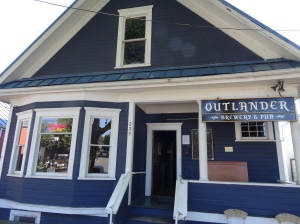 Outlander Brewery & Pub – This was the real “find” of our journey. We had just taken a magnificent tour of the Theo Chocolate Factory and decided to take a walk, because surely a 15 minute walk at 2 miles per hour would burn off those 2,000 calories we just inhaled. On our trek, Ken spotted the pub, which is located in an old house. This setting made it extremely comfortable to walk into; the older, mismatched furniture added to the charm, reminding me of the furniture at the Corner Brewery (n/k/a Arbor Brewing Company Microbrewery) that they had in the lounge, back in the day. And it was just as comfortable to walk into. The only bad news was that they were in the midst of brewing new beer and thus their selection was limited. Nonetheless, we enjoyed our sampler and I especially liked the Hefeweizen. It had a crisp taste, a hint of bananas and cloves with a nice, spicy finish. The best thing about the beer was how well balanced it was; I often eschew hefeweizens because they are too wheaty, but this one had a nice, clean taste. Looking at their website, it appears that they have brewed a number of very interesting beers and I can only hope to get back there one day to try some. Until then, I would compare the Hefeweizen to Arbor Brewing’s Bavarian Bliss. 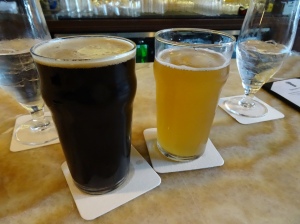 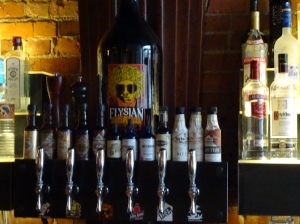 Elysian Brewing – I don’t feel that I can adequately rate the bar itself because we went into the wrong one. That is, there are several branches of the brewpub, and we picked the one that is more cocktail bar and less brewpub. In fact, it was no brewpub at all except that it offered Elysian beers on tap. The atmosphere was definitely upscale (think: Vellum or the Raven’s Club). This is not meant as an insult, but just to say that it wasn’t a brewpub. In fact, when I asked the bartender what hops my beer was made with, he replied that he hadn’t memorized his hop list for the day. Nevertheless the beer was excellent, especially the Split Shot Espresso Milk Stout. While I do love stouts, I usually don’t like milk stouts. Part of it is the thought of lactose in my beer…it just isn’t my thing. And part of it is that I can usually just taste the lactose sweetness to the expense of all else. Luckily, the espresso cut into the milky taste and left a beer that was creamy and dark, with a lovely coffee aroma and smooth finish. It was like the perfect cup of coffee, but with a 5.6% ABV. This beer was definitely on par with my favorite Michigan sweet stout, Saugatuck’s Neapolitan Stout. 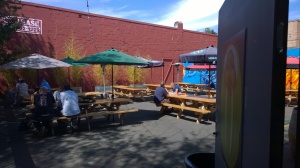 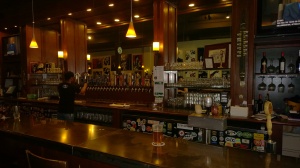 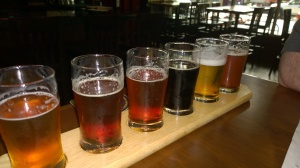 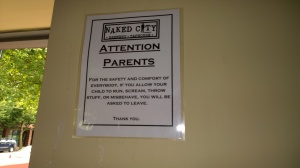 The Naked City Brewery has one of the best themes I’ve come across: old, noir movies. The names of the beers reflect this theme and the televisions were showing the Turner Classic Movie station! Again, we enjoyed our sampler and my standout surprised even me: the Brute Force IPA. Didn’t I just say that I’m not a huge hophead? This beer was just that good! They used Cascade and Simcoe hops to hop and dryhop the beer, but neither overpowered the biscuity, malty flavor. The citrus flavor from the hops was present up front, but it finished off to a nice, warm biscuit of 6% ABV goodness. In fact, if anyone had come back to serve us, we would have ordered more beers. I don’t drink a lot of IPAs so it was hard to think of one to compare it to, but I read some of my old blog entries and I would pair it with Griffin Claw’s Grind Line Pale Ale for a head-to-head comparison. 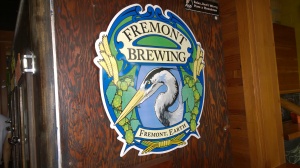 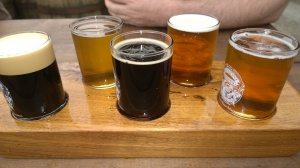 Our last visit was a quick stop to the Fremont Brewery. Apparently, tens of thousands of people go to the Fremont neighborhood to watch fireworks on the Fourth of July—who knew? Many of them were at this brewpub, so it was hard to get a feel of the place and we definitely could not talk to the very overworked bartenders. We still managed to snag a sampler though, and my standout beer was Fremont Summer Ale. It was described as citrus in a glass and it was—light, crisp and at 5% ABV would be very easy to drink while doing yard work (if I did yard work). It was the perfect ending to a nice week away. For its citrus notes, I would compare it to Atwater’s Summertime Ale, although Atwater’s is more lemony while Fremont’s had more of a tangerine taste to it. The beers were solid, but service was hit or mess as referenced above. I did appreciate that Outlander clearly said it was 21+ only and the sign that Naked City had. Fremont, on the other hand, was very kid friendly and even had a section with toys. As most of my friends know, I believe that kids do not belong in bars (restaurants, like Pike, are fine) and the fact that saying this is controversial and leads to arguments will tell you just how pro-natalist of a society we are. I have had people unfriend me on social media for this view. That should concern anyone who believes that adults need adult time, just as kids need kid time. Cheers!