Last we knew, I was complaining about how to make it through January and here we are smack dab in the middle of February! A ton of snow days helped the month pass (one of the many, many things teachers need to stop doing is flooding Facebook/Twitter with SNOW DAY posts and I regret even mentioning it here and I do so only to mention that when I have days off, I get lazier than usual and that is one of the reasons for no blog posts since then. Is it weird that I get actually lazier when I have nothing to do? Perhaps. Has always been that way though!) and a ton of fun events with friends also helped.

But the biggest help of all was going to Florida this past week! My dad and stepmom live down there part of the year and I have the undeniable privilege of going to visit. I still have to scrimp, save, whip out the charge card but at least there is no hotel fee!

I am also very privileged to live in The Great Beer State. Florida’s beer scene is, well, it makes beer go like this: 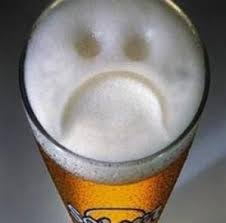 But to their credit, they are really really trying. New brewpubs are opening up and I applaud them. We hit three outstanding brewpubs: Peg’s Cantina/Cycle Brewing, Dunedin Brewing Company and Fort Myers Brewing Company. Sadly, our story starts with another:

I will not name the “brewpub” except to call it Brewery X. Ken & I looked it up online and it *clearly* said that it was a brewpub with its own beers (along with other beers on tap and alcohol). We drove an hour out of our way (25 miles, but in Florida, that equals an hour or more of driving) to get there only to find…they weren’t serving their beer. They were open as a brewpub, but in order to get “their” beer, I would have had to have bought a $15 shirt and received a “free” pint of beer (note: they were not using true pint glasses so it would have been more like 12 or so ounces). I declined and asked about the “guest beers” on tap. We had to go through three bartenders before we could get some information (our main bartender was a nice guy, but he looked like he was 12). I did end up with something from Cigar City (initially served Ken’s beer instead but we quickly realized the mistake) and it was good but still. If you are going to purport to be a brewpub, *be a fucking brewpub*. Or at least put a disclaimer that the license was being held up and you couldn’t serve your own stuff. People love stuff like that because then they can bitch about the goddamned gubmint and we’d all have a great talk over the guest beer.

I got over it and went on to have a great vacation and I looked like this:

the rest of the time. More about the other three brewpubs in a few…I will “tease” by saying that the chocolate porter at Fort Myers Brewing gave Atwater’s Decadent Delight a run for its money. No kidding. I never thought I would find anything even close and lo and behold, there it was! And also, I got my dad drinking microbrew beers!!!