A couple of weeks ago, I piled myself into my car & drove up to Lansing. It is not often that I go up to Lansing because for some reason, I always think it’s like a four hour drive when in fact it is less than an hour. (Note: I am no allegiance to either UM or MSU so it’s not about that).

The dinner was put on by Vine & Brew in Okemos and was held at the charming Soup Spoon Cafe in downtown Lansing. When I walked in, I told the host my name and he seated me at a table. My friend Amy was joining me but she wasn’t there yet. At some point, I got up to go to the bathroom and when I came back I found a free beer waiting for me! Amy showed up a few minutes later as did some spicy edamame. The beer was Founders Pale Ale and it paired perfectly with the spicy edamame. I’m a late comer to the idea of edamame but I really like it now…I really like squeezing the pod and making it “poop” out a bean 🙂

The first course was Arbor Brewing Company’s 2011 Flamboyant Wile Ale, served with a seared scallop, pancetta, roarin’ 40s blue cheese, smoked pear and a dollop of strawberry puree. Holy shit. The sour mixed very well with the pear, puree and blue cheese…that blue cheese was absolutely amazing. Amy & I found out that you can buy it for real at fine cheese stores, which is delightful. Also, there is a character on the Wire called Cheese. He is played by Method Man. He is a bad guy.

Next, we got Dogfish Head Noble Rot which was a beer I had never had before. It was paired with a cornmeal pancake, wine soaked raisins and…foie gras. Do you know what fois gras is? I thought it was cow liver pate and I was okay with that. It came in a cube and I thought well, okay, whatever and popped it in my mouth. Then I found out what it really was–it’s motherfucking GOOSE LIVER. Seriously? Oy. Did I just eat goose liver?!?! OTOH, geese can suck me. They shit all over the place and laugh when you step in it.

Next up was Jolly Pumpkin’s Maui Sobrehumano, another beer I hadn’t had before. It was, like all JP beers, amazingly sou but still very drinkable. It was paired with puff pastry, brie, ricotta, gruyere and cranberry port chutney. The sour beer and the cranberry chutney were perfect together and the cheeses were delicious. 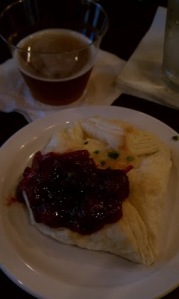 Next was the main course and the only course that didn’t work for me. It featured a rare lamb chop. I do not eat rare food or medium rare food or medium food or even medium well food…if it is leaky blood juice, I do not put it in my mouth. My friend Amy & our tablemates happily took the chops off my hands, leaving me to enjoy the sweet potato puree and fried leeks. I also got a second helping of the puree when I told the nice server about my issues with blood. (Interestingly, I have seen blood coming out of people on several occasions and it never bothered me…of course, I didn’t have to eat the people afterwards). This course was paired with Stone’s 10th Anniversary Ruination. This beer was a little too strong for me and kind of killed the taste of the food. I think I would have liked it better on its own.

Lastly, we were treated to an absolutely amazing dessert–a chocolate bourbon truffle with macadamia nuts and bacon inside, topped with coffee foam and with a little pretzel “handle”. And…get ready for it…it was paired with Founders Kentucky Breakfast Stout. Swwwwwoooonnnn! I’m glad they only gave us one of these courses because if it was like the Old Country Buffet, I’d still be there eating and drinking.

The restaurant was awesome and I heard something about more beer dinners to come! A great night…our tablemates were nice and chatty, the food was delicious and the beer was amazing…cheers!