But I’ve been watching my calorie intake and figured I shouldn’t eat a whole pie. So I decided to have a dinner party! I rounded up the posse and set a date.

(As an aside, I should say that anyone is welcome to come to these parties. I would rather die than have anyone think I’m excluding them and truly anyone is welcome. Unless I don’t like you. You know who you are :)).

So since I was making cherry pies, I said “well hell I should have a “red” themed party!” (I also asked folks to work on their interpretations of Warrant’s masterpiece, “Cherry Pie” but no one did. Sigh.)

For starters, I had some appetizers: 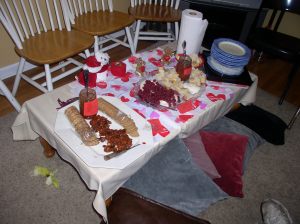 On the left is a tomato-apple chutney that I canned last summer. I got the recipe from the Ball’s recipe book and I had some reservations. Tomatoes and apples seemed an odd combination. There was also raisins & peppers, which makes it sound even odder. To my delight–OMG! Yum!!! It had the most loveliest flavor. Not too tangy, but with a kick. I put it over cream cheese and mozzarella and served with crackers.

Next you see raspberry from my Locavorious food share over brie cheese. Next to that is my canned bruschetta in a jar from my girl Cindy’s masterpiece blog, Mom’s Kitchen. I served it with sliced baguette and mozzarella.

What I forgot to photograph was my edamame pate with roasted red peppers. I got some edamame from Locavorious and was like, “What the fuck is this?” The same day, my Vegetarian Times magazine (a birthday gift) arrived and, because God smiles on simple girls who don’t know of His glorious creation of edamame, there was a recipe for edamame pate. I made it, but didn’t read it right and didn’t realize you had to take the beans out of the shells. Oops. So after it was all said and done, I had to frantically search the internet to make sure the shells weren’t poisonous (they aren’t). I had 17 people coming over and really didn’t want to kill a bunch of my friends. So they aren’t poisonous, but they aren’t the tastiest things either. The roasted red peppers (also from my frozen food share) looked lovely, but the taste was odd. The pate called for mint and I think that kind of threw it a little. At any rate, it didn’t kill anyone so that was good.

I may have mentioned that I have clever friends! People brought with them red wine and red beer! Here is a sampling of the beers: 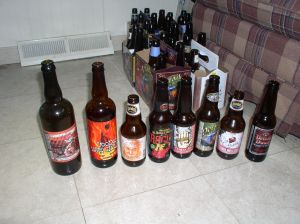 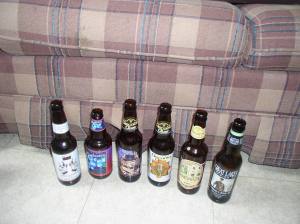 Did I mention I have groovy friends? They brought food too. I made meatloaf…three of them. One had my homemade ketchup on top, one had my homemade chili sauce on top and one had frozen cranberry sauce on top. I also whipped up (get it?) some mashed potatoes and my semi-famous biscuits. Friends brought parsnips (I love those things! Took me forever to try them but they are gooo–oood, as Cousin Eddie would say), maple-bourbon carrots, asparagus, green beans, couscous salad and good things that I am forgetting off the top of my head, so please remind me in the comments.

Did I mention pie? Yes I did make pie!!

Recipes can be found here.

I wasn’t 100% thrilled with my pie…it had too much crust. Fortunately, I had bought some vanilla ice cream to go with it and I think that kind of tempered it. I hope. People ate it, anyway.

So that was the Red Party! I had a great time and it was lovely to see my friends. Even if no one one stood up and made like Warrant….