Pie has long scared the crap out of me. The whole idea of making a crust is I think what gets me. I sort of got over the fear when I made a chicken pot pie a few months ago, but the idea of a fruit pie still kinda of frightened me. Despite this admittedly odd fear, I canned some sweet cherries last August, with the intent of making a cherry pie in February. I am one of those people who follows up on what I say and it’s February so it’s pie time!

Since I have today off, I decided to make the pies today. Also, I am having a dinner party tomorrow that features the pies so you know, I kind of had no choice 🙂 When I looked in my refrigerator, I noticed that my butter supply was dwindling. I buy it from a local source and it comes in these huge chunks. My chunk was more like a lump. Well, shit. I was (and am) still in my pajamas so there was no going to the store to buy more. I mean, it’s not like I could get dressed and hop in the car. So I thought about it and decided to make the bottom crust out of butter and the top out of Crisco. The recipes are absurdly simple.

I used my favorite cookbook, Heirloom Baking with the Brass Sisters, for the butter crust. You simply haul out your food processor and put in 2.5 cups of flour. Then you put in 1/3 sugar (my favorite sugar is Pioneer) and throw in some salt. Pulse. Now take your 1 cup (Do you believe that!!! ONE CUP!!) of butter and cut it into little cubes. Toss them into the food processor. Pulse until crumbly. Add 1/4 cup of ice water and pulse until you got yourself some dough. I had to add a little more water.

Now spread some parchment paper on your counter. Martha Stewart taught me this one, btw. Thanks, M. Good lookin’ out. Put a chunk of the dough on the paper and roll it out. My girl M also taught me to kind of roll the dough onto a rolling pin and then unroll it into the greased pie pan. This sounds weird but it is easy to do and it worked, sort of. I patted down the bottom crusts and turned my attention to the cherries I had canned back on August 15th.

I pitted and canned the cherries according to the Ball’s Blue Book and they have waited, patiently, amongst the tomatoes and jams and salsas. Today they were called up the Show and performed very well. I put the two pints into a big pan along with 4T cornstarch (in retrospect, I think that was a bit too much), about 1 T of lemon juice, dash of salt, about 1/3 cup of sugar and some vanilla flavoring. The recipe that I used called for almond flavoring but I have never bought almond flavoring in my life and don’t intend to start now. I heat it up to thicken it, even though the recipe didn’t require me to do this. Like magic though, it thickened up and looked pretty. I let it cool and filled the first pie crust and realized….

….Oh, oh! I didn’t have enough cherries for both pies. I improvise all the time in my classroom and so I put on my Magical Teacher Problem Solver Hat and decided that I could use some of the many blueberries that I have in my freezer. I grabbed the first bag that I saw, which happened to come from my friend Rena’s business called Locavorious. I dumped the whole bag in with the remaining cherries and stirred. It looked so pretty, see? 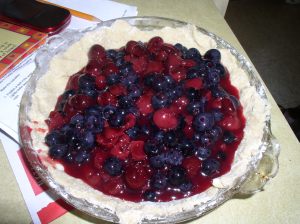 So then I had to make the top crusts. I used the back of the Crisco tin, which requested that I put in 2 cups of flour, 3/4 of chilled Crisco (I had let it sit in the fridge about 20 minutes. Good ’nuff.), and a dash of salt. I also added a palm full of sugar just cuz that’s how I roll. I did the little pulsity-pulse thing in my food processor and added about 1/4 c of cold water and rolled it out like I did before. I had a little more trouble putting the top crust on so it looks a little cockeyed but I am never neat…that’s just not my style.

In case you were wondering, here is what my kitchen looked like:

I put the pies in the oven at 400 for 30 minutes; then I lowered the temperature to 350 and baked for about 35 more minutes. The COOLEST THING EVER happened, too. I opened the oven to check on my masterpieces and they were breathing at me. Remember that scene in Poltergeist where the steak starts breathing at Marty, the camera guy? Right before the maggots come out and Marty peels off his face? Like that. It was awesome and I just started at the wonder for a minute.

When I took them out of the oven, they were bubbling and happy: 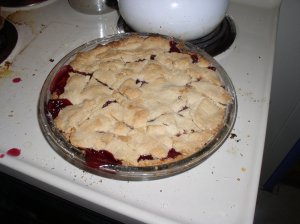 We’ll see how they taste tomorrow, I guess. Meantime, everyone please bow your heads and sing it with me: “She’s my cherry pie! Cool drink of water such a sweet surprise. Looks so good bring a tear to your eye*, sweet cherry pie!” 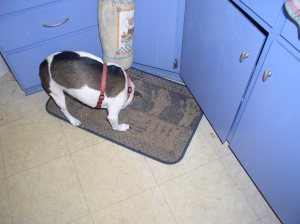 *To really get a tear to the eye, read about what happened to that super hot girl in the video. Her implants leaked and almost killed her and she got some other horrible disease. Another tear–but a tear of laughter–will emerge when you see how badly Janie Lane (the lead singer of Warrant) has aged.